5 buildings which represent Prague architecture at its best

One of the main reasons Prague looks very special is thanks to its diverse architecture. In large part it is because it was (unlike the other European capitals) never systematically bombarded. Now all those spectacular buildings constructed in different styles create a unique romantic atmosphere in the city. That is why Prague architecture is just the best!

Close look at the Dancing house

Its name is Ginger and Fred

– To get to the balcony with a beautiful view, you have 2 options:

House of the black Madonna

House of Black Madonna located in the very center of the city surrounded by crowds of people.

-it  is the first cubist house ever made in Bohemia. Its style completely doesn’t match to its surroundings. At the time of its construction, the building was just as controversial as the Dancing House decades later.

The building’s name comes from the Baroque statue of the Black Madonna. It is set on its corner.

– legends say that if there is a statue, picture or any other depiction of the Black Madonna on the exterior of the building, it means that there are some underground passages in those places.

In this case it turned out to be true. Under the house of Black Madonna we can find one of many Prague’s historical underground trails. It ends in a cellar of an old house near the Tyn Church.

-Popular tours of the Prague’s underground stopped operating at the end of November 2015, in response to the terrorist attacks in Paris.

-Inside of this interesting piece of Prague architecture we can currently find stable exhibition of the Czech Cubism. It ispresented by museum of Decorative Arts and the restaurant Černá madona.

-According to esoterics and mystics this place is also a very special Prague’s energy crossing. Definitely good to hang out. 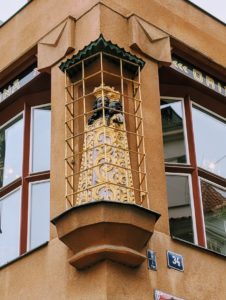 Black Madonna is a symbol. A sign of many underground passages crossing under the house

Looks like a normal house- noone would ever guess how luxurious this villa really is from the inside.

Villa Muller from down the hill

1234- The pope canonized the monastery

1253- Agnes buried her brother Václav I. in the monastery in the Church of Saint Francis

1282- Agnes died and was buried in the chapel of St. Mary 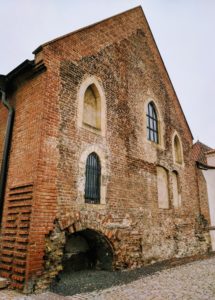 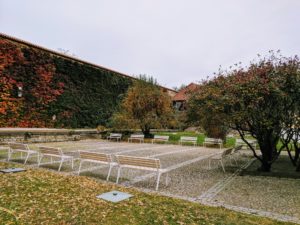 Garden of the convent is an oasis in the hub of the city.

– above all during the summer, the convent is now coming to life with Agnes LIVE! Project.

Every Tuesday, Thursday and Sunday, visitors can experience a varied program that includes thematic tours of the monastery complex with non-traditional guides. Walks around the monastery focused on history and Prague architecture…The monastery hosts   number of musical performances, slam poetry or other literary events. On Thursday its garden changes regularly in the summer cinema.

Church of the sacred Heart

Church made in 1932 using a brick wall technique.

The pupil of Vienna Professor Otto Wagner came to Prague before the First World War and taught architecture. He gain a good name for himself.

After the new Czechoslovak republic was born, president Masaryk has chosen Plečnik to transform the “monarchic castle into a democratic castle”.  He never received any pay for this work or any other projects which he realized for the presidential office. He claimed that the task itself was the greatest Honour he could ever receive.

At Masaryk’s proposal, Plečnik became an official architect of the Prague castle. But at the same time the newly founded University of Ljubljana selected him as the professor of architecture. He had to divide his interest between the two cities.

The architecture designs for the Prague Castle he created mostly in Slovenia. His pupil Otto Rothmayer executed them. Nevertheless, Plečnik never gave up his personal supervision. Every summer he was regularly visiting Prague to inspect implementation of his work.

All those unique buildings are very diverse. They symbolize people’s everyday life in a different eras. That is what makes Prague architecture such a great reflection of the time.

We use cookies to ensure that we give you the best experience on our website. If you continue to use this site we will assume that you are happy with it.Ok